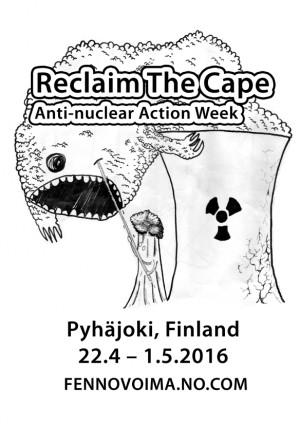 So. There’s an anti-nuclear protest site at the west coast of Finland. And it’s holding an action week between 22th of April – 1st of May, 2016, while celebrating its first anniversary of existence. What’s all this about? To put it all in a simple nutshell:

Fennovoima is a Finnish nuclear power company established in 2007 by a consortium of Finnish power and industrial companies thinking it’s a mighty good idea to put up a nuke plant at Pyhäjoki, a small municipality at the west coast of Finland – by any means necessary. Fennovoima’s project nearly faced its much wished-for doom when German energy giant E.ON, the main investor of the project at that time, decided nuclear power is bad business and withdrew its money in 2012.

Rosatom is Russian state corporation: it’s the only vendor in the global markets that offers the nuclear industry’s entire range of products, both civil and weapons. It’s led in an authoritarian manner by a nine-person strong supervisory board, elected single-handedly by President Putin – and naturally, famous for projects riddled with mafia connections, massive delays and accidents.

Fennovoima-Rosatom was born when Rosatom marched in to save Fennovoima: after E.ON left, it was the only investor willing to participate. Fennovoima needed a financial saviour – and Rosatom aimed to polish its reputation with a project in the west. It’s all about the geopolitics, you know: it doesn’t hurt Russia to place a geopolitical footprint to a region close to Nato-favoured NEAT military test area in northern Sweden and of that much-talked about Arctic oil.

The Pyhäjoki protest camp saw daylight on April 2015, when first clear cuts started at Hanhikivi peninsula. While legally shady ”preparing works” advanced, the camp held its ground at the very construction site for five months, blocking the works, causing the local police complaining they haven’t got the resources anymore to deal with the protestors. At the same time newspapers were filled with news of sabotage and general mischief. In September 2015 the eviction of the camp took place, taking a full eight days to get the last climber out. After the eviction the camp relocated to a site offered by a local land owner, roughly 4 km outside the construction site. Direct action and general mischief – still in program.

We know its a bit of a madhouse here, as you get to face with one go the whole current Russian administration, Nato-West, a nuclear energy giant, private security firms and the Ministry of Employment and the Economy of Finland. But hey, ho told not to aim high? On April 2016 the camp holds its first anniversary – and it’s time to pump up the gear. To be mad enough to bring the concept of mass civil disobedience to Finland in this scale. The goal is simple: to flood the construction site with people – and hold it as long as possible. May the nearby regions also be filled with all sorts of anti-nuclear, anti-capitalism, pro-all-things-good actions. We tip our hats to diversity of tactics – and summon all of you ecofreaks, antimilitarists and others to join us.

Schedules and infobits:
22th of April – 1th of May: the action week. Pyhäjoki is accessible by public transportation, hitch-hiking and cars: check the map or contact us for details. We cook vegan. Accommodation mainly in big heatable army tents – but if you have a tent on you, bring it in! Remember to dress warm. Solidarity is a verb: we encourage folks to drop in a voluntarily donation for food and such. Yes, you’ll be able to wash: but it’ll be chilly. Before arriving we’d love you to drop as a post beforehand of when, how many, with or without tents etc. you’re coming. Questions will be answered at: stopfennovoima [at] protonmail.com

26th of April: Chernobyl memorial day – and the big action day. Along the week other activities possible.

For the whole week there will be workshops, lectures and skill sharing stuff to keep you busy.