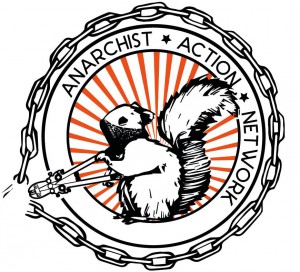 Venue is accessible. Bring food to share as we can eat in the venue.

The Anarchist Action Network is an autonomous network made up of local groups and individuals from the anarchist movement based in the UK. We came together after the 2013 G8 summit to help re-build an anarchist network for the UK and take action together against capitalism and other oppressive elements in society. The network meets every three months, in a different town or city, to make decisions for the network by consensus.

We organised two ‘Anarchist Travelling Circuses’, in Newport, south Wales and East London, as well as numerous other events, demonstrations and weeks of action, and we now plan more of the same!

We’d like to welcome you (except cops and journos) to be a part of this.

One response to “Next AAN meeting”