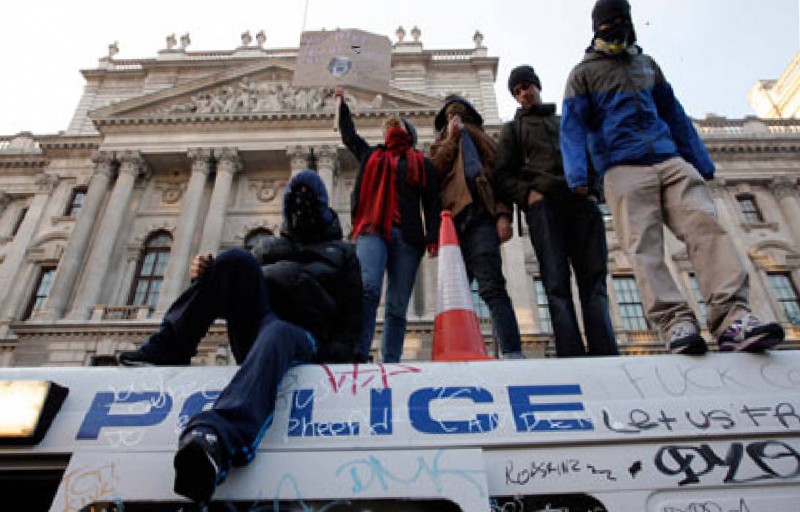 This is a guide to staying safe, staying free, and being effective at protests in the UK. It’s split into five sections. The first two deal with practical advice on preparing for protests and what to do on the day. Sections three and four deal with police tactics and how protesters sometimes counter them. Finally there is a summary of UK protest law – what kind of things people get arrested for, your rights on arrest, and dealing with the criminal (in)justice system.

Public Disorder! is written by several authors, who between them have had a lot of experience of police, protests and the law. The point is to share some of our knowledge and experience in order to help protesters to stay free, stay safe, and be as effective as possible. We hope that some of it will not be necessary – defending yourself against the police, dealing with being arrested – but these things both happen far too often, and we have gone into as much detail as we can in order to help you prepare yourself. That means that we are honest about the police – they are violent, and often brutal. It is important to know that police brutality does happen, so we can work out how to deal with it. But it is also very important not to be intimidated. It does not happen to everyone and what gets left out of news reports is that more often than not, in the midst of it, protesters looked after and defended each other. Sometimes people get scared away from protests when they hear about police actions – but this is exactly what the police want! Real safety doesn’t come from staying away and feeling scared – real safety means sticking together, so that we know we don’t have to be afraid of them. Solidarity is strength!

Disclaimer: People choose to take action to further their cause in many different ways and propose many different tactics ranging from marches, occupations, sit down protests and signing petitions through to more clandestine activity including property destruction and other forms of sabotage. This text does not encourage any particular kind of protest, the choice is yours.