The AAN is born!

Anarchist Action Network is made up of individuals and autonomous local groups, based in towns and cities across the UK and further afield. In the past we have come together to organise resistance against the G8 and NATO summits and temporary anarchist spaces in London and Newport. We meet in different places around the UK every month or so. Here’s some news about what we did in 2014 and at the start of 2015. 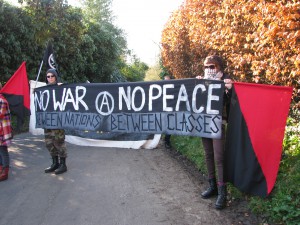 Protesting against NATO in Wiston, Sussex.

The AAN came out of the Stop G8 network, formed to organise resistance against the 2013 G8 conference and to help rebuild anti-capitalist movements in the UK and beyond.

We decided we wanted to carry on organising together and to rename ourselves the Anarchist Action Network. We think it’s important, when taking action, to talk openly about and promote awareness of anarchism.

One of our plans to spread anarchist ideas is to set up anarchist spaces around the UK, in areas where such places don’t already exist. In April we took over a disused Thai restaurant in the centre of Newport (opposite the copshop) for a week. We gave away free tea, coffee and cake and had an infoshop and anarchist library.

We served a free evening meal and held workshops on everything from anti-militarism, opposing military recruitment and NATO to workers’ organising and resisting the bedroom tax.

The final day focused on anarchism. One local person said, at the end of one of the workshops, that they had realised that there was a word to describe what they had always been, and that was an anarchist!

Anarchist Action Network is planning to hold similar events around the UK with the aim of raising public awareness of anarchism and building a movement with the strength to take renewed action. We are planning one for East London in August 2015. 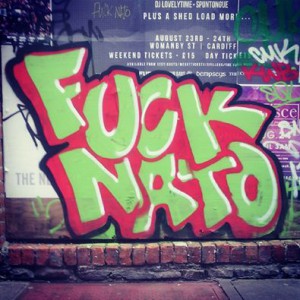 We decided to join with Stop Nato Cymru in building resistance against the NATO summit in Newport. NATO are an armed alliance acting out the military objectives of a small group of world leaders. Far from protecting our security, they act to secure more power and resources for themselves – while dragging us into more bloody wars. In March people blockaded a NATO meeting in Steyning. The meeting was to set out the conference’s ‘strategic narrative’, meaning they were working out how to pull the wool over our eyes, persuade us to join their armies and not to resist their imperialist wars. In July, in the run up to the NATO summit, AAN and Stop Nato Cymru held a day of action against militarism. Activists took part from London, Cardiff and Newport, locking themselves to the front doors of missile developer MBDA, occupying the HQ of arms company Airbus Group and closing the Armed Forces Careers Centre in Cardiff by occupying the roof.

In October, activists from Cardiff, Newport, London and Bristol came together to protest the DPRTE arms fair in Cardiff.

A Food not Bombs stall was set up outside the Motorpoint arena where the fair was being held. Delegates had to do a walk of shame past the protesters, who weren’t shy in telling them what they thought about the arms trade. Several delegates were soaked with red paint, symbolising the blood of the victims of the arms trade. Plans are afoot to resist the next DPRTE in 2016. 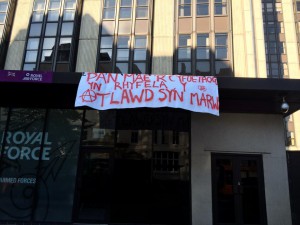 Nearly 20 people were arrested at the NATO and DPRTE protests. Almost all of them were found not guilty or had their cases dropped (including the people who threw paint over the arms dealers at DPTRE). A solidarity campaign was set up to support the defendants.  If you want to donate towards defendants’ costs email [email protected] 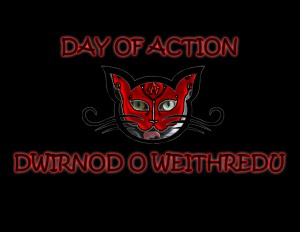 During the course of the 2014 week of action a diverse range of actions were taken by many different groups and individuals. Here is a summary of what happened:

* Stop NATO camp set up at Tredelgar park in Newport

* Mass march and radical bloc against NATO in Newport

* Effigy of Obama burned in Cardiff

* Action against securitisation and repression at the fence surrounding Cardiff castle

* No borders noise demo at UK Borders Agency in Cardiff

* Activists hand in to police in Newport a demand for the arrest of NATO leaders , based on evidence of war crimes leaked by Chelsea Manning.

* No to Nato March on Celtic Manor from centre of Newport and mass demo against the NATO dinner at Cardiff Castle.

Setting minds free, getting feet out onto the streets

At the end of the week of action the AAN and Stop Nato Cymru issued the following statement:

Last week we saw a diverse struggle against NATO in Cymru. Marches against NATO in the streets of Newport and Cardiff; actions against the forces driving war in the banks and the securitised zones; workshops and discussions at the camp about connected issues from Gaza to police repression; people spreading the word in a hundred different ways, from conversations with locals, to the camp, to the web. But the struggles against capitalism and militarism are not a one-day, or even a one-week, event. The actions taken this week by Stop NATO Cymru, the Anarchist Action Network and other organisations are a small part of building up a movement capable of bringing about radical change.

So, when we look back, does it make sense to ask whether we “succeeded” in the week of action? We think it does. If one more mind went beyond the distortions of the mainstream media because of what we did, then yes we succeeded. If one more pair of feet was spurred onto the streets by what we did, then we succeeded. And if one more pair of hands joined with ours, yes, we succeeded. In the coming struggles, those hands will again pick up the tools to take action, until the last drone is smashed. We hope to see you there. 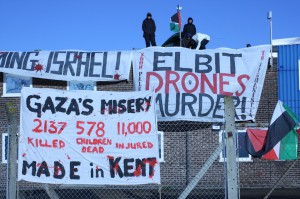 Anarchist Action Network took part in the occupation of an arms company in Kent on Tuesday February 17 2015.

Instro Precision, near Broadstairs, was occupied for more than 12 hours, from 5am, to protest its sales to both Israel and Afghanistan. Four people took the roof with banners, with ten more on the ground, one of whom locked herself to the front gate. The activists decided to leave after shutting the firm down for the whole day. There were no arrests.

Instro is owned by Israeli arms company Elbit Systems, who make drones that are used to kill Palestinian civilians in Gaza. Optical systems like those made at the Instro factory are also supplied by Elbit for use in drones flown over Afghanistan.