Callout to Demonstrate against 2014 DPRTE arms fair in Cardiff

8.30 am at Cardiff Motorpoint Arena. Wednesday, the 8th of October

“When the rich wage war, it’s the poor who die.” – Jean-Paul Sartre 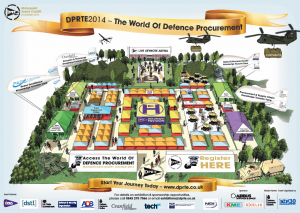 On the 8th of October Cardiff will host one of the UK’s biggest arms fairs at the Motorpoint Arena. Let’s show them what we think of their dirty business! We call on people from south Wales and beyond to come and picket outside the arena that day from the time they open for registration at 8.30 am.

DPRTE this year will be attended by some of the UK’s biggest arms companies, as their exhibitor list shows. They also host a conference, with keynote speakers from industry and government.

The arms fair was previously held in Bristol, but was forced out by protests.

We hope to see you there. If you would like to be a legal observer contact us at [email protected] . You can also contact us by that email address for any additional information regarding the demonstration

Inspired by the recent Week of Action against the NATO Summit in Newport a group of local activists took control of an abandoned office block on Lower Dock St., secured the building and now announce their intention to launch a new social centre and creative space for the Newport community.

The Newport Action Centre will host a weekly free vegan café, info-talks, various workshops, skill-shares and an art space, regular events to raise money for local causes, and a home for some of us who need it, to run the space from. 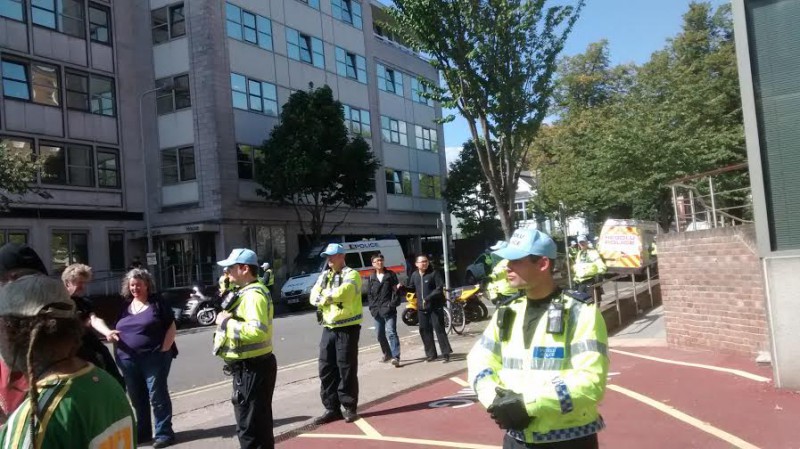 Babylon outside the borders agency

On the 2nd of September, at 12pm around 50 people gathered outside the Cardiff Home Office Buildings for the noise demo planned as part of the Stop NATO Cymru week of action.

In the past, there have been monthly noise demos by No Borders South Wales group, with many different points of focus, ID cards, destitution, dawn-raids and anti-deportation. The focus of this particular demo was how border controls relate to militarism and the NATO war machine

This was called because NATO are part of the samesystem that divides and isolates through borders. Borders are a mechanism for the divide and rule of working class people. Borders kill innocent people around the world as does militarism.

The sound system fired up with revolutionary tunes blasting, people were making sounds with all the tools at their disposal, including lamp-posts and sauce pans. People were engaged as they passed, waving from buses, cars beeping, and people stopping to find out what we were calling for and why we were taking the action. There seemed to be an air of appreciation towards it that a group would undertake the action with 9,500 police currently in the area for the NATO summit.

This noise demo shut down UKBA for the day, asylum seekers arriving to sign were told to come back another time, one said to the protestors “Can you do this every day?”.

FIT (Forward Intelligence Team) thought they were in a good position on top of a wall over the road to gather intelligence on those present but their camera soon got targeted with big posters that covered up their lenses.

There was a spontaneous march to Cardiff prison where the noise demo continued, messages of solidarity were called to the prisoners as prison officers gathered outside the front but made no attempt to intervene.

There were several arrests that day. One man was arrested for walking too close to the Home Office building with a handle-les saucepan, the charges against him were changed three times before he went to his plea hearing.Of the 4 arrested at that demo currently there are only two court cases ongoing, the other two has been withdrawn. If you are available to support these individuals in court email [email protected]

There will be another demo soon as No Borders South Wales continues the struggle for freedom of movement, justice and equality for all.

AAN is part of a coalition of groups supporting this demonstration:

During July and August 2014, 2,150 Palestinians were killed as Israel carried out another massacre of Palestinians in the besieged Gaza strip. Entire neightourhoods were destroyed and mosques, market places, UN relief compounds and schools were deliberately targeted. There was no safe place for the 1.7 million people in Gaza to take shelter from the Israeli bombardment. Israeli unpiloted planes, known as drones, carried out over 800 major strikes. Elbit Systems, Israel’s largest military company, supplied many of the drones used by the Israeli military.

Through its subsidiary UAV Engines, Elbit Systems operates a factory in Staffordshire. The company regularly exports military equipment to Israel. Elbit is also a part of the U-TACS partnership manufacturing the Watchkeeper drone for the Ministry of Defence. END_OF_DOCUMENT_TOKEN_TO_BE_REPLACED

Programme for the Newport Rising

A whole week of events in a venue in Newport

END_OF_DOCUMENT_TOKEN_TO_BE_REPLACED

Anarchists shut down Barclays in Cardiff

The campaigners formed a Radical Bloc on the Trades Council-organised May Day march, breaking from the main route to take action against the bank instead of going to listen to speeches by union officials at the Trades Council’s rally. 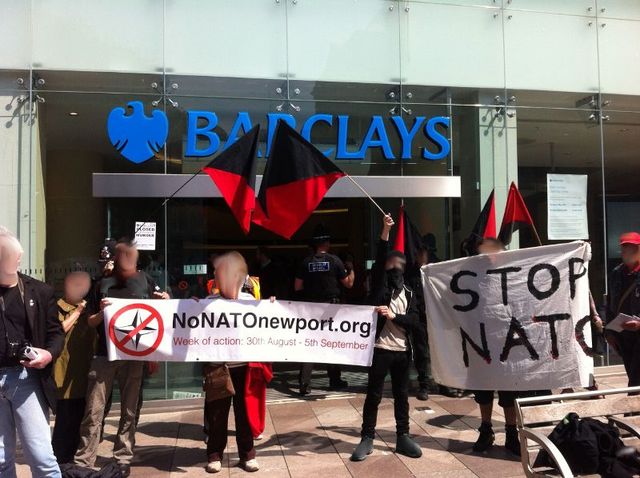 END_OF_DOCUMENT_TOKEN_TO_BE_REPLACED

On Mayday 2014 Anarchist Action Network is calling for anarchists to unite
in One Common Struggle. We are calling on you to join fellow anarchists
and remember the victims of the system’s oppression, take action against
the symbols of the state and capitalism and hold events highlighting the
need to struggle for a better world.

END_OF_DOCUMENT_TOKEN_TO_BE_REPLACED

Next weekend (19th/20th April) people from different parts of the UK will converge on Bristol for a meeting of AAN: the Anarchist Action Network. http://anarchistaction.net/

END_OF_DOCUMENT_TOKEN_TO_BE_REPLACED

From the 26th May to the 1st June 2014 Anarchist Action Network is holding a week of Anarchist events dubbed the Anarchist Travelling Circus in Newport, South Wales. The week will include, workshops, discussions and skillshares and more. We hope that these events will address some of the issues which most people are facing right now from problems with housing, to welfare cuts and the government austerity agenda, as well as increased poverty, environmental destruction, police repression, racism and the racist border system.

END_OF_DOCUMENT_TOKEN_TO_BE_REPLACED

Anti-militarist activists today blockaded a NATO conference at a stately home in the Sussex countryside. Meanwhile, banners were hung off road bridges close to the venue to greet delegates as they arrived at Wiston House in Steyning.