May Day: remember the Dhaka workers and all those killed by capitalism 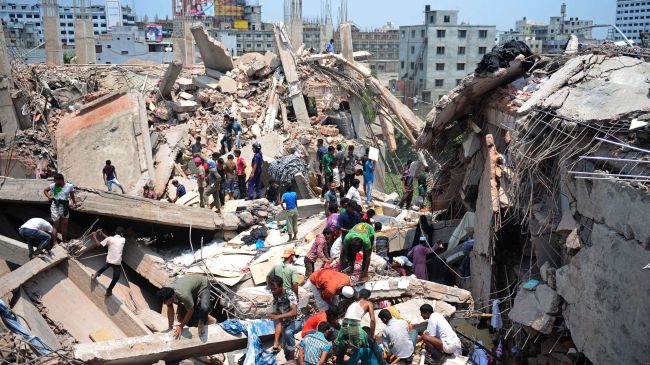 Meet 12 NOON @ Clerkenwell Green EC1. Then move off after main march for actions.

(NB: Note correct start time 12 Noon, not 11 am. The march actually leaves Clerkenwell Green at 1pm, heading for Trafalgar Square. After we get to Trafalgar Square, we’ll move on for demos against the textile factory killers. You can follow @stopg8uk on twitter for updates through the afternoon).

On 24 April more than 350 workers were crushed to death in a collapsing factory in Dhaka, Bangladesh. The factory made clothes for high street chains including Primark, Matalan, Benetton, and Mango. Just another “accident” in the race for profits. Those responsible for these deaths are in London and in towns across the UK: we need to hold them to account.

May Day was first celebrated as a day of international workers’ solidarity in 1890. It was called to commemorate the murder of four anarchist workers in Chicago by the US government.

123 years later, capitalism continues to kill workers all over the world. Some are executed or shot dead, like the 34 striking Marikana miners killed by South African police last August, defending the interests of British company Lonmin. Many millions more are sentenced to slow deaths from hunger, poverty and despair. Others are killed in so-called “workplace accidents” in mines, factories and fields where life is the cheapest commodity of all.

On May Day 2013, while celebrating 123 plus years of struggle, we also need to commemorate some of the latest victims of capitalism. We think of the 30 Bangladeshi and other migrant workers shot by Greek strawberry farm bosses in Manolada on 18 April (thankfully, none of the gunshot wounds were fatal). And above all we remember the more than 300 Bangladeshi workers (perhaps many more) killed in the collapsed textile factory in Dhaka on 24 April.

Capitalism kills. And the killers are not just the cops who pull the trigger, or the factory managers who ignore the cracks and lock the doors. The ultimate killers are all those who profit from death trap factories, and everywhere where capitalism forces us to wear out our bodies and minds and risk our lives for the riches of the few.

Primark, Matalan, Mango, Benetton, and other clothes chains profiting from cheap labour are killers. The banks and investment funds that finance their deals are killers. The governments in Bangladesh, Greece and Britain who protect them are killers. We call on everyone to join us on May Day and remember the dead with action. We need to hold the clothing chains, and all other capitalist murderers, to account.

In London on 1 May the Stop G8 London group will join the traditional May Day march at Clerkenwell Green at 12 noon. Look for the Stop G8 banners and black and red flags. After the main march, we will move on to demonstrate against those responsible for the deaths in Dhaka. Come and join us, or hold your own demonstrations and actions wherever you are. People have been taking to the streets in Bangladesh since Thursday and there will be mass strikes on 2 May. Let’s show them some solidarity!

PS: For a detailed article on the causes of the factory collapse, see here:  http://libcom.org/news/house-cards-savar-building-collapse-26042013